An early start and a period of good weather seen Andrew and Paul head over the Rest and Be Thankful and go to Gortein Point on Loch Fyne.

Not a single other diver was seen on our route across at any of the usual dive sites and only a couple spotted on the route home.

The entire reef was covered in life. Millions (literally) of brittle stars and many many of all the other starfishes we see. Gardens of Plumose anemones with a number of dahlia anemones thrown in. The biggest Lobster either of have ever seen! Close up and personal with a sleeping cod. A nice scorpion fish. Plus all the other things we see regularly.

A seal came and checked us out before we got in but not underwater. Beautiful day, good viz, warm(ish) water . Fantastic day out and shows why this site is a favourite.

With the continued issues with the Rest and Be Thankful, the club headed back to Loch Long and the A-Frames dive site. An early start meant we arrived before the masses and ensured getting a prized parking spot!

Visibility on the first dive was great and continues to be some of the best we’ve seen at this site for a number of years. However, an oil container ship docked at the end of the first dive making the second dive a little murkier.

Andrew, Robert, Matt, Sam and Paul had a great day, despite not managing to see the octopus and squid that have been recently reported. However, there was large amounts of sealife to be seen including a couple of congers.

Billy, Andrew and Matt went to Conger Alley on Loch Long for a couple of dives. Not a bad day and fairly good Viz. Cautious dives as COVID has kept Matt out of the water for 6 months. 3 Conger eels had the site living up to its name. Plenty of other life including a well camouflaged scorpion fish that Matt nearly squashed whilst I tried to point it out!! Water temperature was nearly 15 in the top few metres and only a little colder at depth, so Billy wasn’t shivering in his semi- dry for once! It’s so good to be getting out again after all the restrictions

Bill and Robert took father and daughter Adrian and Emily out today for their first Open water dives in Scottish waters.

We took Emily in for the first dive today. Apart some early ear issues she coped well with rest of the dive. Even swam through a shoal of Pollack and found a dogfish all on first dive! Wow!

After Robert’s suit flooding on the first dive Bill took Adrian in for the second dive. He coped very well and buoyancy was good as well. No pollack or dogfish but hey-ho can’t win them all.

The weather gods were king to us today which made it a great day out for all. Well done guys!

Robert and Andrew visited Conger Alley in Loch Fyne to introduce Samantha to Scottish diving. We were lucky that the weather held for the duration of the dives and we had good visibility. Water temperature was a balmy 12 degrees down to 12 metres. Highlight of the dive was a number of curious large Ballan Wrasse near the top of the reef. Plenty of the usual critters but no Congers. ☹️. Welcome to Scottish waters Samantha!
Weather on the way home was atrocious! 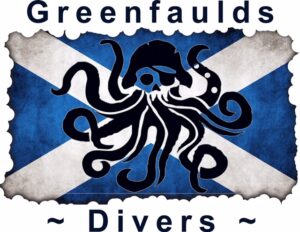